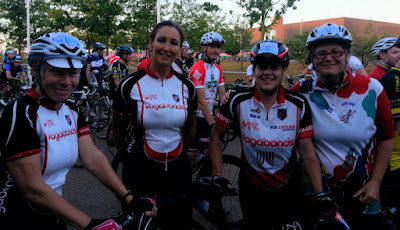 Four WAGS (Angie Doughty, Margie Jackson, Georgia Collins & Tan Tucker) set off from the North East to the Metropolis of London (well, Stratford actually) to fly the Vagabond team flag in the Prudential Ride London-Surrey. This ride was part of a massive festival of cycling in the capital. Saturday saw the Freecycle (in which 70,000 were reported to ride on the closed streets of London) followed by the Brompton World champs, the Women's Pro Grand Prix & youth events. But we had another challenge in mind – the 100 mile sportive following the Olympic Road route of 2012 on Aug 2nd. Some of us were well prepared, others (me) doing 100 miles for the first time and decidedly anxious about their ability.

Meeting in Stratford had its issues. Please note if you meet in Stratford there are two stations (Stratford International and Stratford) and trying to give someone directions by saying "find the red crane, beside the steps of the Westfield centre" doesn't work because a) the Westfield centre seems to be miles long, b) there are lots of steps into it and c) there are about as many cranes in Stratford as cars (or so it seemed). But we made it. Our apartment was near Upton Park and we had a jolly evening out, in preparation for the Big Day.

Alarms were set for 0415 and we left the apartment semi-legally with some lights heading for the start. It was a perfect day, still and cloudy, clearing later to becoming a tad hot (30 degrees). We arrived in our pens and waited for the count down to start with Matt Dawson cheering us on our way...

It was incredible to whizz through London streets emptied of traffic. The Limehouse link led us to the Tower of London, Royal Courts of Justice, through Trafalgar Square and on through Hammersmith out to Hampton Court. That was the easy bit. Out over the M25 into Surrey and the ride started to roll a bit more. We were in the midst of a mass of Lycra (mostly male) on some pretty amazing bikes. Others seemed to be taking it Very Seriously Indeed. We scooted round roundabouts the wrong way (because we could) and generally pretended we were in the Tour de France, lapping up the ovations in Kingston and other villages on the way.

I'd been told the hills of Surrey aren't a patch on Northumberland and that was [mostly] true... but Leith Hill was still a climb made more difficult by the narrow road and people jumping off to walk. Thankfully we were ahead of the main crowd so made it up without mishap. Descending in a crowd was, shall we say, interesting. Box Hill was the highlight – a steady climb with zig-zags such that you could pretend you were in the Alps seeing others above and below you as you climbed and rewarded by glorious views at the top.

After that it was mostly downhill all the way back with the odd kick up at Wimbledon before the approach to London with streets lined by cheering crowds (must have known we were coming!) then through Admiralty Arch and down the Mall to Buckingham Palace and our medals – sadly not presented by HM The Queen.

After the exertions we relaxed in the sunshine in Green Park with "recovery drinks" watching the pro race on a large(ish) screen which functioned intermittently.

The only unpleasant part of the day was trying to negotiate crammed roads on the way back to Stratford, but we did it safely and landed back at Upton Park intact.

It was an amazing experience. Thanks a million to Tan for organising the entry for the WAGabond team and for supporting the WAGs in the club. I joined less than 2 years ago and never thought I could ride 100 miles. Not many people do their first 100 after their 60th birthday! The encouragement of everyone in the club, from all the different ride leaders and friends I have made has been fantastic. Thanks everyone!!