Saturday 19th December 2015 saw a merry band of Vagabonds head south to Hetton le Hole for the annual club cyclocross championships. A total of 15 racers across all age groups took part on another testing course. 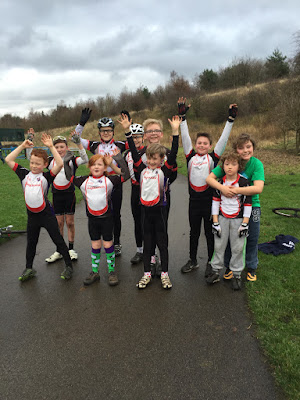 In the first race the youngsters took to the grassy fields around the lake and clubhouse as the adult course is still a bit too tricky for some of the real youngsters.

Right from the off Daniel Holmes showed his intentions and set off at break neck speed to very quickly pull away from the rest of the field. After a very short time he had gained an unassailable lead, which he held on to until the chequered flag. Behind Daniel the youngsters and novices were having their own little battles. Faces of determination and pain could be seen right through the pack, apart from one. Isla Hodgson had a smile as wide as the Tyne throughout the whole race and in her first season of racing is already showing the right attitude and that is, “enjoy your racing, but above all, have fun”.

Daniel Holmes, first in the under 12 category

Will McDonald 2nd U12

Shortly after the youngsters finished, the youth race took place. This is for all the youngsters aged 16 and 14 and was set over the full course on the hillside, which was also used by the adults. This is a true test of bike handling skills, grit, determination and strength. There are numerous courses that can be set out at Hetton, none of which are easy by any stretch of the imagination and this one proved to be no different.

Unfortunately I didn’t see a huge amount of this race as I was warming up for my own event, however I did see enough to see Joe Tubby take an early lead, closely followed by Matty Wells. As the race developed Joe’s strength and experience showed through to enable him to take the win in the main race and take first place in the club championships. Matty was second in the main race and second in the club championships too.

After the youths had finished it was just left for the Blue Ribband event. The advantage of the club championships being run under TLI rules is that all the Junior, Senior, Vet 40 and Vet 50 categories can be held in the same race, which allows the best individual adult in the club to take the title. 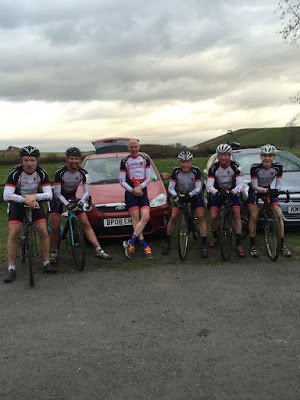 The race was started half way down the start finish straight of the road race circuit to allow the 50 competitors time to spread out before the start of the main course for real.

The whistle sounded and the mad sprint to be first on to the narrow paths begun. Within 150 metres the field had spread out enough that all the riders could file along the narrow paths without too much incident. The front of the race was dominated by Craig Gow and a rider from Vieri Velo race team. The pair were having a tough battle with each other, testing each others strengths and weaknesses. Craig was strongest on the hills and could eek out a gap, only for it to be closed down again on the technical downhill sections.

Suffice to say these two rode off into the sunset to leave Simon Gibbs, Graeme Gow and Rich Lewis to battle it out for the minor places. Simon was the strongest of the three and eventually rode away from Rich and Graeme to take second place. This just left the battle for third place between Rich and Graeme.

Conditions weren’t getting any better and the mud was beginning to get deeper, making riding harder over each lap.

Rich managed to get a gap of 20 seconds or so over Graeme for a couple of laps. Sensing Rich was tiring Graeme put a big effort in and got back on to Rich’s wheel, composed himself and put in a big attack. Rich couldn’t respond and fell back unable to keep up with the pace.

With three laps to go things took a turn for the worse when Graeme rolled his rear tyre. He quickly pulled the tyre back on to the rim and resigned to taking it very easily round corners for the remainder of the race to prevent it coming off again.

After 55 minutes of racing the results were as follows:

Well done to all those that took part. Lets hope for a bigger field next year.