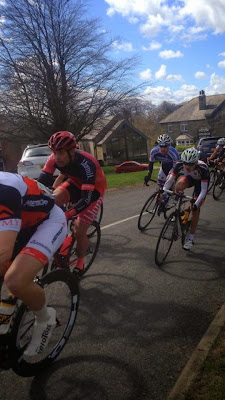 With the cancellation of the Cramlington 10 mile time trial on Sunday due to roadworks that sprung up overnight, action was limited to massed start racing.  Sunday saw the Sloan Trophy road race at Stamfordham as well as the club's first North East Youth League promotion at Prissick.

Martin Wells did an excellent job of promoting the club's first massed start cycle race for many years, supported by a number of other club members.  This event also doubled as the club's circuit race youth championships.

The Sloan Trophy was contested on Sunday 26th April, starting in the very picturesque village of Stamfordham. There were two Vags taking part in the race, young Tim Irwin and even younger Craig Gow. After Saturday's biblical downpours the weather forecast was to be slightly better, however rain was on the agenda. As it turned out the sun was shining, albeit it was a tad on the chilly side.

The race started under controlled conditions for a few hundred meters and then the lead car indicated the race had started for real. The course for those of you that don't know it, was an anti-clockwise loop out of Stamfordham, up to Black Heddon a couple of other left turns and back to Stamfordham. That doesn't really help much! But, for those that did the 100 mile TT it followed the exact loop round (just no wind). The race distance is 62 miles and is on a rolling course with no great climbs in it, but testing enough for the average club rider.

Lap one saw the only female rider taking part (Anna Turvey) dropped off the back of the marauding pack in the first couple of miles due to the speed of the race start. As the bunch came round Craig was sitting very comfortably in 8th place keeping out of trouble, which generally manifests itself at the rear of the group. Tim was sitting comfortably in the pack.

As the group came round on lap two, Craig had settled in round about 18th place in the bunch and was looking very comfortable. Tim was there or there abouts, keeping a watchful eye on proceedings. As the race unfolded Craig had got himself a good wheel to sit on, only for two riders to try and push him out and take the wheel themselves. Craig has learned that although he is probably the smallest and youngest rider in these races, he isn't to be messed with. Tim Irwin on the other hand has learned that, although he might be a big strapping lad, you don't try to steal a little fella's wheel, especially when it's your team mate you are trying to push aside.  (Tim declared he had only been told off once during the race and unfortunately it had to be Craig that did the telling off).

Not seeing the race unfolding as you do on each lap of the Prissick Crits, it makes it a bit more difficult to cobble a race report together, however with Tim as a set of eyes in the group I got a good idea of what happened out on the course. Craig, from what I can gather was racing with maturity, conviction and an ability that belies his age and experience. Not content with sitting in and letting others do the work, he covered some attacks and was involved in chasing down groups that had made an attempt to get away, at all times looking comfortable, at ease and not intimidated by anyone or the situation around him.

By lap three a couple of riders had made a break, however were closely policed by the following peloton.

Lap four was Craig's undoing. A group of 6 riders came through Stamfordham with about 100m advantage. The next group was slightly bigger with about 8 to 10 riders, including Craig. He had a steely determined look on his face and as we watched him go by, he stood up out of the saddle and shot out of the group he was riding with. Unfortunately Craig hadn't realised there was another lap to go and he was going for the sprint finish. Once he crossed the line he realised there was another lap to go. Unfortunately his legs said there was no lap to go and shut down on him. The last lap was a lonely procession for Craig. Disappointment did not even start to say what was written on his face at the end.

After the mad dash towards the finish line on the penultimate lap, there were a lot of tired bodies and with tiredness comes lapses in concentration. With somewhere between two and three miles to go Tim got involved in what appeared to be an argument between a rear wheel on one bike and a front wheel on another. The inevitable happened. The rear wheel won and there were about 5 riders ended up on the floor. Unfortunately for Tim this was the start of a slow limp back to the end of his race. Tim is fine, however his brand new Shimano Dura Ace wheels wouldn't look out of place on Fred Flintstone's car (I hope the mechanic can sort them Tim).

It was good to see the club represented at the race, even though the results weren't in our favour.

Next weekend Craig is representing the club at the Barnesbury festival of cycling Junior Road Race at Stannington. Let's hope he gets his lap counting right this time.