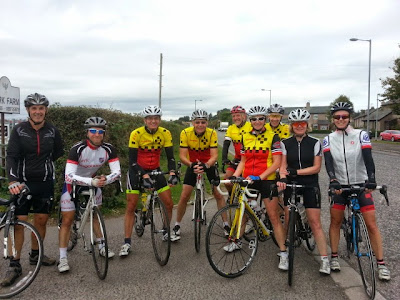 This weekend Kev and I had a wee trip booked over the border to stay in some wigwams in a place called Shawhead, a few miles from Dumfries. Our friends who we went with are not the cycling types and given the weather it would have been rude not to go on a bike ride.

Thanks to good old Google I soon found Dumfries cycling club and dropped them a quick email. Rather than us cobble a route together why not see if some locals would let us join them? Their club chairman Gordon McNeil was quick to reply and was very welcoming to the idea of a visit.
They had 3 groups for their Saturday ride which met at Halfords in the town. We decided to join the medium group which we were told would average around 16-18mph (!!). The biggest shock was to come; THEY DON'T DO CAFE STOPS!!!
We managed not to disgrace the Vags good name though and held our own on a brisk lumpy ride with 9 others. It was good meeting some locals and having a bit chat with them.
I have to admit that I didn't have a clue where we were most of the time. The scenery was great thought,  moorlands a bit like Weardale followed by lanes like North Yorkshire and Northumberland. It was a bit more lumpy then most of our routes but the road surfaces were better and traffic quieter.
By the end of the ride we both had a serious cake deficiency but one of the group kindly escorted us to a fine eating establishment in the town centre where we enjoyed Guinness and chocolate cake with some very fine teas.

I have offered an exchange visit should any of them fancy it. I'm sure if any Vags are visiting up that way they'd be happy for you to join them if you dropped them a line.