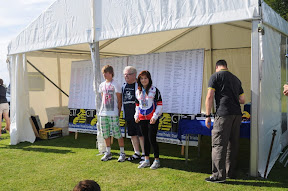 The GHS is the National Schools 10 mile championship, which riders must qualify for from the district rounds held throughout the country in June.  This year the club was represented at the National Championships by Tim Wilcock, Kyle Watts, Hamish Turnbull, Kirsty Boak, and Jess Watts.  The finals took place on Saturday 10th September near to Newbury on an out and back single carriageway course.

Kyle and Tim were competing in the 16 year old boys category, and both performed well, Tim finishing in 32nd place overall (23:38) and Kyle a little further back in 48th place (24:16).  Hamish put in strong performance for 5th place in the 13 year old Boys category with a time of 25:06.

But top honours for the day went to Kirtsy and Jess, with Kirsty's time of 27:17 (a new club record) proving just 13 seconds too quick for Jess, to reverse last year's placings.  Kirsty can now look forward to an invitation to Champions Night in January!